I’ve never been a fan of my own name. “Jeremy” just always seemed weird to me, like Kermit or Apollo or Zamfir. I’m not sure who thought “Weiskotten” was a good idea. You’d think my ancestors who immigrated from Germany would have scrubbed that turd and started fresh. Maybe Roosevelt, or Rockefeller, or Zaius.

So when Joe, Cort, and I decided to start a Ruby on Rails web development consultancy (we’ve since added design talent BTW!), we didn’t just need a name. We needed the name. A name that would inspire greatness and drive our enemies mad with terror, so we sat down with a dozen thought-leading Branding Experts and brainstormed until we had something that simply couldn’t fail.

Wait, wait, wait. That’s not true at all! A lot has happened in the past 14 months, so my recollection of events is a little cloudy. It’s all coming back to me now…

For the unobservant and/or lazy, “Terrible Labs” is actually two words. Let’s talk about each word independently – what each means to us and why we chose it. To mess with your OCD I’m going to start with…

This was the easy part. We followed in the footsteps of companies we admire and whose work we build on every day: the excellent Rails consultancies Pivotal Labs and Envy Labs. (And Joe had an LLC called Lind Labs.)

We liked the way the word connotes experimentation, research, and learning. We wanted our culture to include continuous learning and trying new things – tools, processes, methodologies. We fear stagnation.

Every project we work on is a unique snowflake. There’s always something new to learn and something to experiment with. If we tried to fit every project into a one-size-fits-all bucket, we’d be doing our clients, and ourselves, a disservice.

This part was trickier!

We knew we wanted to call our fledgling company something Labs, but what? We brainstormed. We had ideas. Some of them sucked. Some of them were pretty good but the .com domain or Twitter handle weren’t available.

Then I suggested Terrible Labs.

Joe liked it! Cort wasn’t sure at first. He didn’t think anyone would trust or give money to a bunch of dumbasses who would call themselves “terrible” anything. Obviously terrible has a slightly negative connotation. But Cort was outvoted in a 2-1 landslide, with our assurances that if we failed to build a business because of our name, we’d change it.

Everything started to really make sense once we threw a fucking awesome dinosaur into the mix.

Yeah, our big badass T. Rex’s name is Leroy. Joe is a big French nerd, and Leroy is French for “The King”, which means he’s basically the Elvis of dinosaurs. (Leroy is Elvis, not Joe.)

But why a dinosaur? In the business world, “dinosaur” describes people who have failed to adapt to a changing environment, enabling their own extinction. That sounds like the opposite of our love of learning and fear of stagnation!

Oh, and dinosaurs existed millions of years ago and didn’t even have TVs. We’re 21st century geeks, damn it! We drool over iPhones and iPads and Androids and Microsoft Surface with Windows RT! OK, fine, not that last dingleberry, but you get my point.

Yes, associating your software company with dinosaurs and extinction and ignorance of technology and general terribleness could go wrong. We banked on the name being memorable, and that our market had enough of a sense of humor and adventure to look past their first impression.

The Result: A “Brand”

Terrible Labs. With a big red Tyrannosaurus Rex who looks poised to get shit done with a hint of a smile. 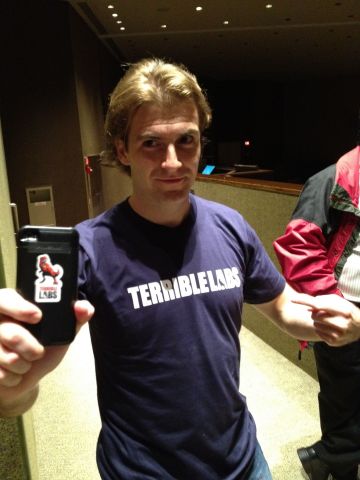 As Mike Troiano told me: a ”brand is just the collective emotional response…among others”.

I hope the emotional response toward our brand is excitement and confidence that we’re bringing people’s ideas to life. Plus maybe a little bit of fun.

It doesn’t always work, of course. We’ve had an Accounts Payable person double-check, “Are you sure you want to send this much money to… TERRIBLE LABS?” (Our hidden camera captured the moment.) I don’t think this person ever saw Leroy, though. Leroy really ties the room together.

This post was inspired by Boaz Sender’s How Bocoup Got Its Name, a touching tribute to his mother, Florence, who recently passed away. Please read his post to learn about her amazing life and influence! Boaz, among others, spared time for us and shared valuable advice when we were getting started.